January 21, 2018
I made a statement on facebook yesterday that homeschooling my youngest son Amaziyah is about as hard as herding cats! ( No Joke) Amaziyah (Ami)  is such a strong willed child .  I use to ask my self  what I had did to be blessed with such a strong willed child . Ami sincerely believes that the world was created for him and revolves around him.  It took me a while to understand that this was just Ami and he was born this way.  I truly believe that most strong willed children like Ami grow uo to be natural born leaders. I guess I can't complain much  because I was the same way, I had an extra dose of well everything.  Ami is made of the same thread.  He has always had an extra dose of confidence and vision, but oh my God combine those two things with his age, lack of wisdom, experience and understanding and most days i have the perfect melt down or major storm depending on the day and time.

The funny thing is he truly does believe that he has everything under control and all figured out. When things don't go his way his frustration and out bursts can be heard for miles.   As illogical as it is to me this is his world.  Because Ami is a born leader and the baby in the family not a good combo, when ever possible I have to find ways that allow him to lead.  The simple act of letting him chose what subject we start the day with or what we do next is no big deal to me and he feels like he is running the show.   Most of my younger children, Ami included are not strong print learners they are all super bright but most of them enjoy more hands on work.  Ami has an easy breaking point when we are using traditional curriculum.  Once I learned his learning style, I was able to minimize a lot of his impatience and frustration.

I found Moby Max works pretty well for Ami because the program is set up in a way that allows me to srt the time limits,  Ami can always see what he has done and how much time is left.  These short intense sessions allow him to be less agitated.  Ami is a kinesthetic learner so allowing him to move
around and put in a cart wheel here and there is ok because his wor gets done.

As a social worker by profession (before cancer) I know about the power of behavior modification.  But as my relationship grows with God I have learned there is no substitute to God and  his ability to change things and people.  I pray daily for Ami's character and for him to learn control.

As I pray for Ami's heart to change and grow I also allow for weekly consequences.   If Ami has an outburst he has to put a mark on the board under his name, less for three for the week he gets a chance to pick out of the treasure box.  More than three marks and he has a week off mine craft.  (hey it works)

My daughter Aniyah is a natural people pleaser , Ami on the other hand is not.... He is a tell like it is like it or not kind of guy...lol

So I try to make it known when I see him doing something kind or thoughtful  for one of his brothers or sister I encourage the behavior I like and would like to see again. My thought process is I don;t want his lasting memory to be only of correction and discipline. ...

How do you deal with your strong willed child??   Leave me a comment below.. 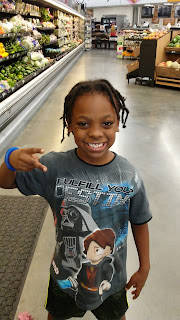 Popular posts from this blog

October 08, 2019
A DAY IN THE LIFE OF A WORKING HOMESCHOOL MOM So life is crazy enough just trying to homeschool throw a job in the mix and the fun really starts... LOL  So I thought it would be interesting to give everyone a peek into this craziness I call life.  So I will be sharing what a typical school day looks like for us with my work schedule included. Make sure you customize your schedule to fit your family best. MORNINGS Wake up by 6 – 7 I get up first and wake the children. The kids take a kong time to get.  To help with mornings we lay out everything out at night. I try to also prep for breakfast the night before also.  7-7:45 – We get dressed and are on the road by 7:20.  Monday, Wednesday and Friday breakfast is on the road and consists of stuff like yogurt/ granola, fruit, pop-tarts ( don't judge I try to buy the all-natural ones). Three days a week I teach at a local private school.  My 5 youngest take classes there and I treat it like a co-op form them and me!      8– 12   I teach psyc…
Read more

A vision board is a tool used to help clarify, concentrate and maintain focus on a specific life goal. Literally, a vision board is any sort of board on which you display images that represent whatever you want to work on, goals for each of your children, your self, or things you want for your school.

The human imagination is powerful, but it works like a muscle. For most of us, that power remains potential power and it's never fully utilized. A vision board allows you to exercise your imagination regularly, creating a more vivid vision of your ideal homeschool life as you develop your ability to make your visions, tangible and the benefits attainable.

So my loved one is an addit!

October 31, 2019
No one plans on their loved ones becoming an addict?  It just happens somehow, somewhere out of the blue for some and by genetic default for others. Even though we can understand that our loved ones who have become addicts are struggling with issues that they can't handle alone.  But the human side of us still has the whys, whens, and hows that invade our thoughts and sway our emotions.  The constant questions of why can't they just stop using.  When is enough going to be enough? How could they do this if they loved us? Addiction comes with many faces it could present as prescription drugs, street drugs,  or alcohol and in many cases all the above.
The Problem is as they struggle so do their loved ones, spouses, children, parents, and even friends.
It is so important for those who loves someone who Struggles with drug abuse these are some signs to watch for does the person in question sleeping more or have irregular sleeping hours (not due to change in job, medication, or lif…
Read more